In addition to the still images which I use in my Beis Hamikdash slideshows, I have also been interested in using the same virtual model to create an animated tour of the Mikdash. Here is an idea I have for part of the opening title sequence. Like all of my other 3D shots, this is modeled and rendered in Cinema 4D.

View of the Short Columns 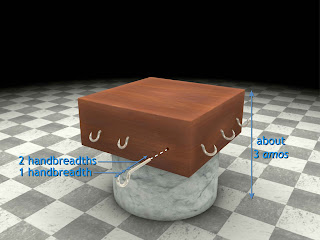 To the north of the Altar, within the butchering area, were eight short columns from which the sacrificial animals would be hung for flaying. The columns were shorter than a man’s height and topped by a square piece of heavy cedar. This block of wood was not fastened to the columns but remained in place due to its own weight. Along three sides of the cedar block, except for the western side, were affixed a row of three iron hooks. One handbreadth of the hook protruded from the block and 2 handbreadths were embedded in the wood.
No comments:

View of the Salt Chamber

Shown is the interior of the Salt Chamber. It was located in the southeastern corner of the Courtyard and served as a repository of a large quantity of salt. The Temple used this salt for three main purposes: 1) to apply to every offering which was burned on the Altar; 2) to sprinkle on the Altar's ramp to absorb the oils and blood which spilled there and thereby prevent the Kohanim from slipping; 3) to tan the hides of sacrificial animals.

salt2 from Yoav Elan on Vimeo.
No comments:

Sun Study of the Temple Walls: Other Issues

In the previous post I used a sun study of the Temple walls to help determine whether the interior wall height of the Courtyard was 40 amos or 70 amos. As I described there, this was based on the premise that the second row of rings from the Altar must be exposed to direct sunlight even on the shortest day of winter. After watching the sun study animation I thought that this criterion could be used in other places where the exact Temple measurements are disputed to rule out one or more of the opinions.

The first question I wanted to address is how the 24 rings to the north of the Altar were oriented. The Mishnah tells us that the rings were arranged on the floor of the Courtyard in a number of rows running from east to west and that these rows either contained 4 rings each or 6 rings each. All agree that the total length from north to south allowed for the rings is 24 amos and that the distance between the Altar and the first row of rings is 8 amos.


• Opinion #1 Each row had 6 rings from east to west. There were 4 rows in total and the space between the row centers would be 8 amos. This would put the second row of rings 16 amos (8 + 8 = 16) away from the northern edge of the Altar.

There does not seem to be any indication in the sources that the orientation of the rows would make any practical difference. If, however, it can be shown  that one of these orientations fails to have the second row of rings in full sunlight during the shortest days of winter then this orientation may be ruled out.

Once the height of the Courtyard walls have been set at 40 amos, the shadow cast by the Altar becomes the most influential factor. The closer the second row of rings is to the Altar, the more likely it is to fall within that shadow, and it is therefore Opinion #2 which stands to be eliminated. Well, upon closer inspection I see that Opinion #2 is the one I used in my original sun study and the second row of rings was clearly in direct sunlight. So it emerges that both opinions meet the criterion and neither can be eliminated on the basis of the Altar's shadow.

The other question is the north-to-south placement of the Altar within the Courtyard. Although the dimensions of the Courtyard are given in the Mishnah, some details are omitted, and one of those details is how far the Altar was from the southern Courtyard wall. Various opinions are given among the commentators, but the shortest distance on record is that of the Tanna, R' Eliezer ben Yaakov, who maintains that the Altar was only 5.5 amos from the southern wall. If it can be shown that when the Altar is this close to the south, the shadow of the southern wall falls upon the second row of rings then this opinion may be ruled out. Here is another sun study animation with the Altar placed according to the opinion of R' Eliezer ben Yaakov:

As it turns out, the shadow of the southern wall does not approach the rings at all, and thus we must conclude that the sun study cannot shed any light upon the issue of where the Altar was placed.