View of the music chambers 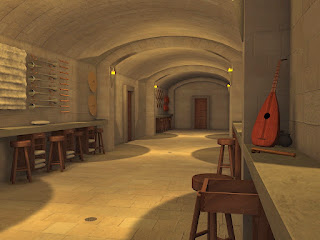 Here is a rendering of the music chambers located beneath the Courtyard. The Leviim would store their musical instruments here and also practice their singing and playing.
No comments:

Slope of the Temple Walls

The Gemara (Yoma 28b) states that the earliest time we may recite the Minchah prayer is "when the [eastern] faces of the walls begin to darken." At face value this means that the prayer may be recited immediately after solar noon, for at that point the sun has passed into the western half of the sky which causes a shadow to fall over the eastern faces of the walls, thus "darkening" them. The Gemara goes on to demonstrate that in practice, however, this is not the case. We have as a general principle that our prayers correspond to the tamid offerings brought in the Temple, and that the time period allowed for the Minchah prayer is identical to that allotted for the afternoon tamid offering (Berachos 26b). If so, the afternoon tamid may also be brought "when the [eastern] faces of the walls begin to darken" yet we find that the earliest permissible time for the afternoon tamid is half an hour past noon. [When the Gemara speaks of "half an hour," it refers not to standard 60-minute hours but to שעות זמניות, solar hours. A solar hour is calculated by dividing the total amount of daylight hours — sunrise to sunset — into twelve parts, and each part represents one solar hour.] The Gemara (Yoma loc. cit.) suggests that there is no contradiction here because — unlike standard walls — the eastern faces of the Temple walls only fell into shadow at half an hour past noon. Rashi explains that this resulted from the Temple walls being thicker at their base than at their top; since they tapered as they rose, the sun continued to shine on their eastern faces even past noon, and only at half an hour past noon did the eastern faces finally darken in shadow.
The commentators explain that the Temple walls were purposely built in this fashion to ensure that the afternoon tamid offering not be brought too early (see Tos. Yeshanim to Yoma loc. cit. and Rabbeinu Tam, Sefer Hayashar §308.). [They understand that the tamid offering could, in theory, be brought immediately after noon. By building the Temple walls as described above, it created a buffer of half an hour to safeguard against bringing the offering earlier than noon.] Since the movement of the sun varies with the seasons, the length of a solar hour also changes throughout the year. One might think that the walls must be designed so that their eastern faces will darken at half (of a solar hour) past noon on any day of the year. This is not necessary, for the only time that the tamid offering was permitted to be brought as early as half past noon is when erev Pesach falls out on Friday and enough time must be allowed after the tamid for the multitude of Pesach offerings to be brought and roasted before the onset of Shabbos. As a result, the Temple walls were designed to darken at half past noon specifically on the fourteenth of Nisan (the approximate date of the Spring equinox). [Although this phenomenon was meant to be observed on interior of the Courtyard 's western wall – for the benefit of those standing in the Courtyard – the text of the Gemara indicates that all of the walls were designed in the same fashion.]
The position of the sun at half an hour past noon on the Spring equinox in Jerusalem is a readily-quantifiable phenomenon, making it possible to estimate the slope of the walls of the Temple.

Sunrise and sunset times can be generated mathematically for any date and location on earth, and from this data it is possible to calculate the time of solar noon as well as the length of the solar hours. Dividing the length of a solar hour in half and adding it to the time for solar noon yields the time of day (in local time) at which the sun is at half past noon.
It is also possible to mathematically pinpoint the position of the sun in the sky relative to any given location on earth for any time and date. This position is given by two angles, azimuth and elevation, where azimuth is the angle between true north and the point on the horizon directly below the sun, and elevation is the angle between the line to the center of the sun and the horizontal plane. See diagram: 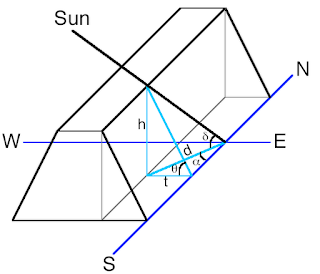 Knowing the azimuth and elevation angles of the sun at half past noon will allow the slope of the Temple walls to be calculated.

(I could not paste the formulas into this post, but they appear here)

View of the Chamber of Receipts 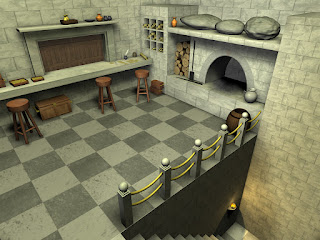 This is a view of the interior of the Chamber of Receipts located within the Hall of the Fire (Beis Hamoked). Here the Kohanim would sell receipts which entitled the purchaser to certain amounts of oil, flour, and wine which accompanied their sacrifices.
No comments: