View of the Chamber of the Nazirites 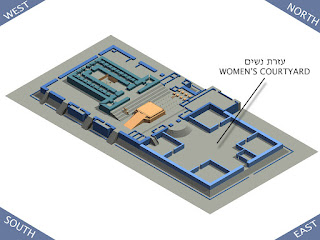 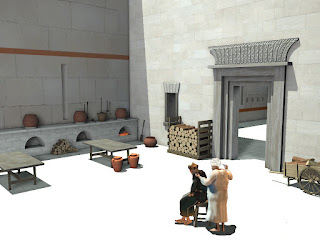 During Temple times, an individual could accept upon themselves the vow of a nazirite. A nazirite is a man or woman who, for a set period of time, does not drink wine, cut their hair, or contract corpse-tumah. When the term of their vow is complete the individual was required to come to the Temple and offer certain sacrifices. The meat of the offering was brought to the Chamber of the Nazirites located in the southeast corner of the Women's Courtyard. In this chamber the meat was cooked and the nazirite would receive a haircut and then the cut hair would be thrown into the fire beneath the pot cooking the offering. Nazirites were not permitted to eat their offerings in this chamber but would take them out of the Temple into the city, either to prevent overcrowding in the Women's Courtyard or because it was more appropriate to eat inside a room with a roof and not under the open sky.

Location of the Nitzotz Chamber

The Chamber of Nitzotz [ניצוץ] was located at the westernmost gate in the northern wall of the Courtyard and consisted of a terrace extending out above the gate. This terrace was left open to the sky while the area beneath it, in front of the gate, was enclosed by three walls. This chamber was one of the locations where guards were posted in the Temple: a Kohen guard stood above on the terrace while a Levi assistant stood below on ground level. On the ground floor of this chamber the Kohanim maintained a fire which was kept burning constantly and would be used to relight the Altar fire should it ever be extinguished.

There is a debate among the commentators whether the Chamber of Nitzotz was located on the outside of the Courtyard (north of the wall) or the inside (south of the wall). This debate may be partially resolved based on the translation of the word nitzotz. Some maintain that it means spark, on account of the fire which was kept burning in this chamber, while others maintain that it means ray of sunlight since the sun would shine through the numerous fenestrations in the back wall of this chamber (opposite the gate) and illuminate its interior (Rosh). I would like to show that according to the latter opinion this chamber must have been located on the interior of the Courtyard.

It would be something of a misnomer to call this the "Chamber of the Ray" if it only receives direct rays of sunlight for such a limited time during the year (unless the intent is literally lashon sagi nahar). When we take into account one further fact it makes it all but impossible that this chamber was located in the north. As noted by Rambam and others, there was a roof covering the entire expanse of the Temple Mount up to the Temple walls. Any chamber just outside the Courtyard walls would have therefore been in shadow the entire day all year round.


In the sun study for Spring (which would also apply to the Fall) the sun is higher in the sky and the shadow of the Sanctuary Building covers the Chamber of Nitzotz for the entire morning (compare with the Winter sun study). Here the chamber is in direct sunlight for only a few hours in the afternoon.


In the sun study for Summer the shadow of the Sanctuary does not encroach upon the chamber at all, leaving it in direct sun all the way until evening when it is finally overtaken by the shadow of the western Courtyard wall. All in all, the Chamber of Nitzotz receives a great deal of sunlight through its southern wall.


SUMMARY According to the view that the word "nitzotz" means "ray of sunlight" the Chamber of Nitzotz must have been located on the interior of the Courtyard. 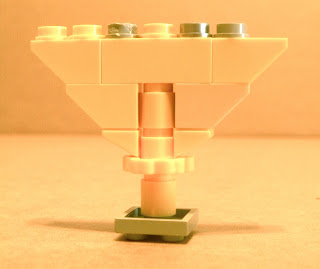 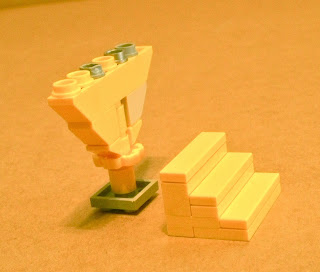