Preparing the Temple for Pesach

In Temple times, the weeks leading up to Pesach included not only preparing the house but the body as well, for anyone who had contracted corpse-tumah had to purify themselves before partaking of the Pesach offering or visiting the Temple. The procedure entailed a one-week quarantine during which the individual was sprinkled with spring water mixed with the ashes of the red cow [parah adumah]. It was not necessary to travel to Jerusalem to do so but rather this could be  carried out in the comfort of one's own city since the family groups [mishmaros] of Kohanim living throughout the land of Israel possessed small, but sufficient, amounts of ashes for this express purpose.

It once happened in the First Temple era during the reign of King Chizkiah that an unprecedented breach of ritual purity caused the festival of Pesach to be delayed a full month (Sanhedrin 12a). One theory as to the source of this tumah is that the skull of Aravnah the Jebusite was discovered beneath the Altar (Tosafos ad loc., based on Yerushalmi Sotah 5:2). [Aravnah was the owner of the threshing floor purchased by King David to serve as the site of the future Temple (II Samuel 24:18-25).]

There are a number of difficulties with this approach:
1) If it was a matter of corpse-tumah, the purification procedure only takes one week, so why was a whole extra month needed?
2) If the remains of Aravnah were causing the tumah, could they not simply be removed from the Temple precincts (where they obviously did not belong) and reinterred elsewhere?
3) Why is it that the skull was only discovered at this point?
4) A closer look at the source in Yerushalmi indicates that this incident of the skull being found occurred in the Second Temple era, not the First Temple era (as Tosafos understand).

The Chasam Sofer (to Sanhedrin 12a) offers a novel historical perspective which addresses each of the above questions. When Aravnah sold his threshing floor to King David he reserved a small portion of his estate for himself and it was there that he was eventually buried. In that region of Jerusalem there were many natural subterranean tunnels and the tumah from Aravnah's tomb made its way through them to the area beneath the Temple. Now, when the First Temple was built King Solomon had taken this into account and he designed the walls in such a way to form a halachic barrier to the tumah which kept it from invading the Temple grounds.

Many years later, the evil King Achaz destroyed the original Altar and built a new one for idol worship in its place, and the extent of his "renovations" was such that it disrupted the halachic barriers put in place by Solomon. When King Chizkiah took office and began to repair the Temple, the tumah from Aravnah's tomb was rediscovered. [Although the Gemara speaks of Aravnah's "skull," Chasam Sofer explains that the term גלגל actually refers to the spreading of tumah underground. See further there.] The remains could not be moved since they were in their rightful place so Chizkiah needed to repair the halachic barriers in order to ready the Temple for use. This, however, was not a simple matter, and he found it necessary to delay the festival of Pesach by one month in order to allow his men time to carry out the repairs.

When the First Temple was destroyed by the Babylonians they razed the building down to its very foundations ["aru, aru, ad hayesod bah"], once again breaking down the barriers which shielded the Temple from the tumah of Aravnah's tomb. The Yerushalmi which indicates that the skull was discovered during the Second Temple era is describing what happened when the Temple was rebuilt by the returnees of the Babylonian exile when they once again had to address the issue of Aravnah's remains.

(Special thanks to R' Nechemiah Feldman for bringing this Chasam Sofer to my attention.)
No comments: 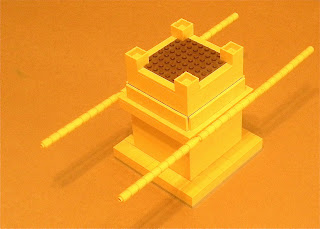 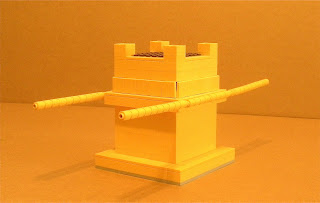 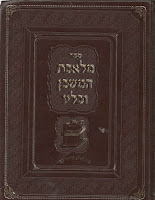 It is that time of year when I take out my copy of Meleches Hamishkan V'keilav by Rabbi Dovid Meyers (printed by the author, 2006 [second ed.]). This book is an exhaustive study of every element of the Tabernacle, from the beams and coverings to the Ark and Menorah. The author has researched so many of the sources which deal with these topics and presents each item in unprecedented detail. The book is arranged by topic in an easy-to-use format, first citing the relevant Torah passage and then a listing of all the laws and requirements which are derived from the verses and commentators. The meat of the book is found in the form of footnotes where the different opinions and sources are cited and discussed. In addition to all the above, there are copious line drawings to illustrate each point, and at the end of every section there is a very helpful collection of drawings which shows the item in question according to the various opinions cited in the notes.

The author has also reviewed much of the material in his book with HaRav Chaim Kanievsky and he prints the correspondance with HaRav Kanievsky in a separate section in the back.

One of my favorite gems of Tabernacle Torah which this book addresses is a question I had asked myself about the adanim (silver sockets) which hold the kerashim (wooden beams). Every student of the Tabernacle knows the dimensions of the adanim, which are 0.75 x 1 x 1 amos (with a hole in the middle to accept the kerashim), and we also know that each one was formed from one kikar of silver. The problem is that the volume of one kikar of silver is simply not enough to form the shape of the adanim! I was pleased to discover that this issue had been raised by others before me and that this question was asked to the Chazon Ish. He answered that the adanim were not, as commonly believed, made of solid silver, but rather were hollow on the inside (Meleches Hamishkan V'keilav p.311, note 15, citing Ta'ama D'kra).
2 comments: