Tour of the Temple: Class 1 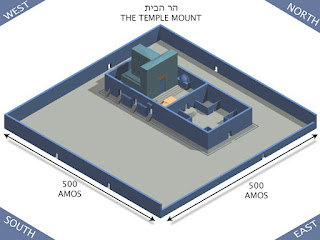 One of the first steps taken in the construction of the Second Temple was a massive earth-moving operation. The entire area of the Temple Mount, which measured 500 cubits by 500 cubits (one cubit measures approximately 18 inches), was completely excavated all the way down to solid bedrock to clear the site from possible graves. Since tumah [ritual contamination] from a grave rises up through the ground all the way to the heavens it would have rendered anyone standing on the ground above the grave tamei [ritually contaminated].
When the First Temple was built, no such excavations were carried out. King Solomon relied upon the fact that since there was no reason to suspect the presence of tumah on the Temple Mount the land was presumed tahor [ritually pure]. However, when the Jews returned from the Babylonian exile to rebuild the Temple they discovered a skull beneath the site of the Altar and this forced them to retract the default tahor status originally granted to the Temple Mount. In such a case where tumah is suspected the land must be excavated down to virgin soil or bedrock (whichever comes first) to verify that no sources of tumah are present. The builders of the Second Temple certainly wanted to avoid any shadow of a doubt and thus dug down beyond the virgin soil all the way to the bedrock; historically, we also know that Herod dug down to the bedrock to provide a sturdy foundation for the immense weight of the walls. 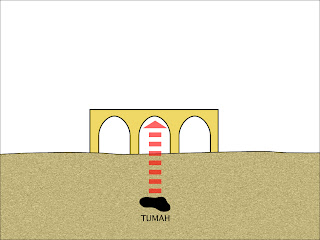 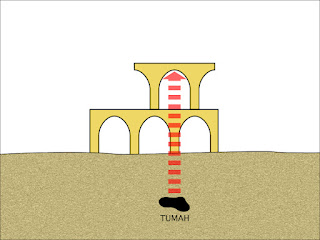 A two-level network of arches was built over the bedrock which further protected against possible tumah. The tumah of a grave is prevented from rising further when it encounters a covered airspace of one handbreadth, thus an arch will protect the ground above it from such tumah. One level of arches would not have been sufficient since any tumah directly under one of the solid support columns would continue to rise. Therefore, a second level was needed with support columns placed over the airspaces of the first level. Although, according to the letter of the law, the excavations alone rendered the entire area of the Temple Mount tahor, it was nonetheless felt that for the sake of the Holy Temple an additional precaution of the double arches should be employed to rule out the remote possibility of an unknown grave within the bedrock itself. 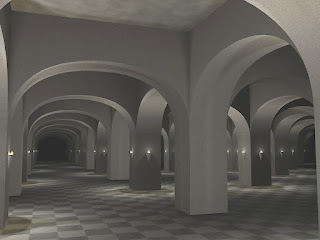 Having excavated down to the bedrock and installed the arches, the Temple could have been built on the now-level plane directly atop the arches. Instead, the elevations of the various courtyards matched the original – and Divinely fashioned – contours of Mount Moriah prior to the excavations. Rather than regaining the original elevations by back-filling the area over the arches with dirt, a system of vaulted tunnels was constructed under the entire Temple complex. The lowest level of tunnels supported the floor of the Temple Mount; above this was another level, 6 cubits high, which supported the area under the Women's Courtyard and Main Courtyard ; a third level, 7½ cubits high, supported the floor of the Courtyard itself.