Lighting the Interior of the Antechamber

In an earlier post I included this image of the interior of the Antechamber. Here the large curtain of the main entryway is partially open with the morning sun shining in from the east, a pretty typical lighting scheme. 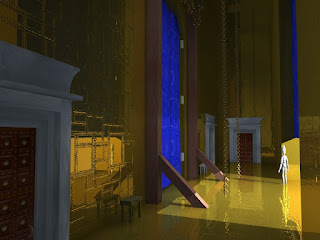 I wanted to experiment with other ways of lighting this chamber and one idea I had is to show what it would have looked like when the Kohen entered first thing in the morning as he prepared to open the Sanctuary's two sets of double doors. Working by torchlight, the Kohen would have slipped past the closed curtain and made his way to the locked door just to the north of the Sanctuary gateway. The lock on this door was located on the inside of the wall, requiring him to reach through an opening in the wall in order to insert the key into the lock. Perhaps it would have looked something like this: 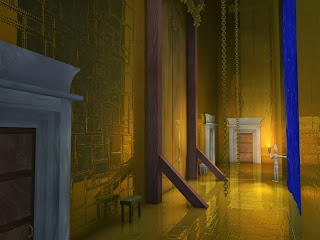 Another, admittedly fictional and somewhat whimsical approach was to highlight the famed golden grapevine which hung above the Sanctuary gateway. In the next image the outer curtain is closed and the grapevine is mysteriously shining of its own accord, casting a curious glow on the walls all around: 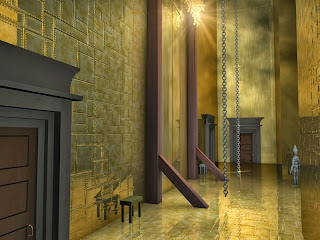