Thickness of the Courtyard Walls

Nowhere in tractate Middos does the Mishnah mention the thickness of the walls surrounding the Temple Mount or the Courtyard, yet some suggest that this measurement is hinted to in the Torah itself.

Among the individuals the Torah exempts from the Pesach sacrifice are those who are too far away from the Courtyard at the time that the offering is being brought (see Numbers 9:10). The definition of "too far away" is the subject of a Tannaic dispute, and one opinion maintains that this verse means to exempt even a person who is just outside the threshold of the Courtyard (Pesachim 9:2, view of R' Eliezer). The Mishnah adds, somewhat cryptically, that this opinion is supported by the fact that the Torah places a dot over the final letter in the word רחקה, far away. To explain the connection between the law of being too far away and the dot over the letter ה, Rav (ad loc.) writes that even if one is just 5 [the numerical value of the letter ה] amos away from the Courtyard it is sufficient to exempt him from the Pesach sacrifice. Ezras Kohanim takes this idea further by concluding that the 5 amos spoken of here refer to the thickness of the wall, i.e., if one is standing just outside the wall of the Courtyard he is exempt from the Pesach sacrifice. A 5-amah wall thickness is also recorded by Rashash (to the Mishnah in Pesachim) and Chanukas Habayis (cited by Ezras Kohanim to Middos 2:6 s.v. עזרת ישראל ג).

Now, as discussed in the last post, the thickness-to-height ratio for free-standing stone walls is 1:4.8. This means that a wall which is 5 amos thick could only be 24 amos high, and yet we know that the Courtyard walls were 40 amos high.

A simple way around this constraint is to taper the wall. The ratio assumes a wall of constant thickness, but if the wall would taper inward so that it is thinner at the top than at the bottom then, intuitively, the wall could be taller without becoming unstable. As luck would have it, the Courtyard walls were thicker at the bottom than at the top (for the reason discussed here).

I spoke with a few engineers in the hopes of getting a formula which would make it possible to calculate how much taller a wall could be if it was tapered. The only suggestion so far is to use the area of the cross-section: In a standard wall, a 5-tefach thickness can support 24 tefachim of height, so the area is simply base times height, in this case 5 x 24 = 120; by tapering the wall and creating a triangular cross-section you effectively double the height since the area of the triangle is base times height over 2, in this case 5 x 48/2 = 120. By redistributing the same mass of stone, you get a taller wall without increasing the thickness at the base.
The same idea can be applied to figure out how tall the Courtyard walls could have been. Starting with a given thickness of 5 amos, if the wall had not been tapered it could be only 24 amos high, and if it was tapered then it could be double that height, or 48 amos (figure A, below). Since we know that the Courtyard walls were only 40 amos high, this is well within the allowable range.

However, we also know that the walls did not taper that sharply. In the above ratio, the angle of the taper is 87˚ whereas the taper of the Courtyard walls was 81.33˚ (for the reason discussed here). If the wall height is to remain at 40 amos, the taper must begin, not at ground level, but more than halfway up the wall (figure B, below). However, this also increases the area of the cross-section to 159 amos2, which is too large.

Now, in that earlier post about the wall design, I had concluded that the wall only needs to taper on the inside, and that the taper only needs to begin halfway up the wall (figure C, below). However, when the area of this cross-section is taken, it is 170 amos2 which is even larger than figure B, meaning that the wall should be even more unstable.

A fourth possibility is to ignore the conjecture about having the taper begin halfway up the wall and instead have the taper begin as close to ground level as possible (figure D). In this case the area comes in at 118 amos2 which is within the allowable range. 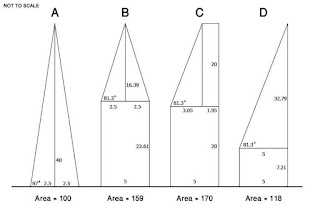 For those who are feeling adventurous and want to factor in those extra 2 square amos of area (i.e., bringing the cross-sectional area from 118 to the maximum of 120), you can set the area to the ideal value of 120 and then solve for a in the figure below.
When I did that, I found a = 4.94 and therefore b = 0.06. This means that instead of having the wall come to a razor point at the top, it levels off to 1.08 inches (where 1 amah = 18 inches).