Locating the Courtyard Upon the Temple Mount

Even though Tractate Middos does contain a lot of detailed measurements for the Second Temple, one of the places where the Tanna is vague is when he describes the location of the Courtyard upon the Temple Mount. The Mishnah does not give explicit numbers but rather states that the southern area (that is, the area between the southern Temple Mount wall and the Courtyard) was larger than the eastern area, and the eastern area was larger than the northern area, and the smallest area was in the west. I looked for a simple mathematical way to calculate the range of possible locations where the Courtyard could have been placed, but I didn't find one.

Can all that be restated in one elegant expression? To make up for my lack of math skills I sketched and fiddled with spreadsheets using brute force until I came up with a working answer that looks like this: 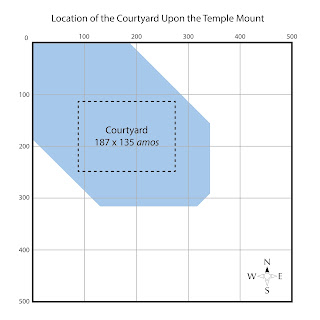 In this graph the blue shaded area represents the allowable locations for the Courtyard. So long as the Courtyard is placed somewhere within the blue area it will conform to the Mishnah's rule that, starting in the south, the amount of space around the Courtyard get progressively smaller as you move counterclockwise.

The Details
To create this graph I started with the easiest case: by assuming that the western area measured 1 amah and the northern area measured 2 amos. From this starting point I calculated the other distances using the relationships given above.

The W and E columns remain constant (since W is fixed at 1) but the greater N becomes then the smaller S gets. Eventually the value of S will be smaller than E, which is not allowed. Here is where that happens (data set continued from above):

In this set when N = 52 the relationship between the sides is still correct. Once N = 53 then the southern side is no longer the largest. It emerges that when W = 1 then the range of acceptable values for N is from 2 to 52.

I then ran the whole spreadsheet again, this time setting W = 2 and starting with N = 3. The maximum acceptable value for N turned out to be 53. And so it continued: the values of N always had an acceptable range of 50 amos (from W+1 to W+51). This is represented by the black shaded area of the (zoomed-in) graph below where I plotted all the acceptable values of N for each value of W. 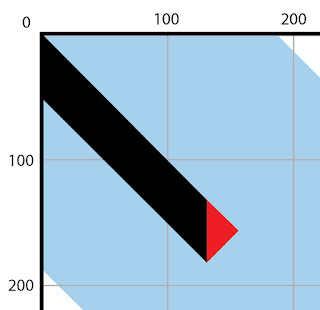 Then something happened. The range of N started steadily decreasing from 50 (at W = 130) down to 2 (at W = 155). This is represented by the red area in the graph above. The reason for this change was that as N became so large, it started getting larger than E, which is not allowed. Here is one sample set from this part of the graph when W = 150.

The very largest allowable values of W and N were as follows:

In other words, these dimensions are the closest that the Courtyard can come to being centered on the Temple Mount. This case is shown in the graph below. 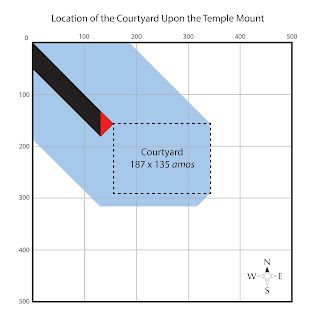