A Larger LEGO® Model of the Second Temple

In honor of the month of Kislev and the chanukas habayis [rededication of the Temple] that took place on Chanukah, I have prepared a new Lego® model of the Temple. This version is in a larger scale than my last attempt and adds a whole new level of detail.

Since a picture is worth a thousand words I'll let the pixels do the talking: 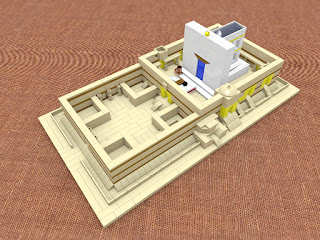 A view of the complete model from the northeast. The Second Temple was built largely of local stone (tan colored bricks) and it had wooden beams running horizontally along its walls (brown bricks). The Sanctuary Building and Altar were covered in plaster (white bricks). The roof of the Sanctuary was tiled with iron sheets studded with spikes (grey bricks). The gates of the Temple were plated with gold (yellow bricks). 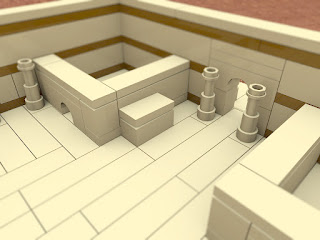 The Women's Courtyard had stone pillars around the inside of its walls. During the holiday of Succos they would build a balcony on top of these pillars where the women would sit. 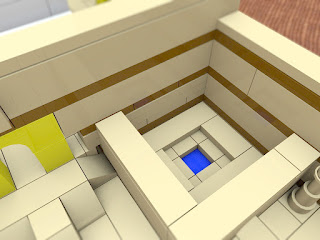 The northwestern room of the Women's Courtyard housed a mikveh. 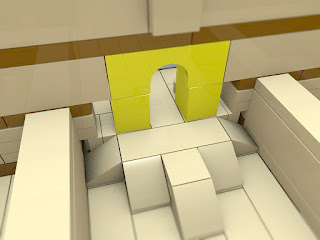 The Nikanor Gate was the main entrance into the Courtyard. It had two smaller doorways to either side. There was a flight of fifteen curved steps leading up to the gate, and at the foot of these steps on either side were entrances to the underground Music Chambers of the Leviim. 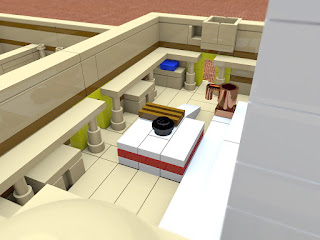 The Courtyard as seen from the north. In the center is the Altar featuring the firewood for the main fire and the pile of ashes in the middle. To the right of the Altar is the Laver, the [shiny!] copper utensil filled with water that the Kohanim used for washing their hands and feet.

In the southeastern corner of the Courtyard (above the Altar in this picture) was a series of three chambers, and on the roof of the central one was a mikveh. The gate in the background is the Water Gate, and above it was the unroofed Chamber of Avtinas where the incense was prepared. Next to the Chamber of Avtinas is yet another mikveh. Both mikvehs were visible from the Courtyard, so when they were being used the Kohanim would hold up a sheet in front of them for privacy. 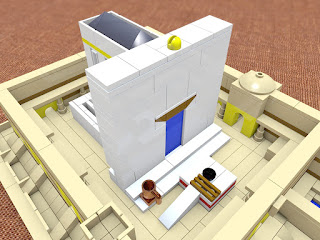 The Sanctuary Building towered 100 amos above the floor of the Courtyard. Above the main entrance were five wooden beams set into the wall, and each beam was slightly wider than the one below it. On the roof of the building was a golden candelabra donated by Queen Helena. To the right of the building is the domed chamber called the Hall of the Fire, where the Kohanim were quartered when they stayed in the Temple. 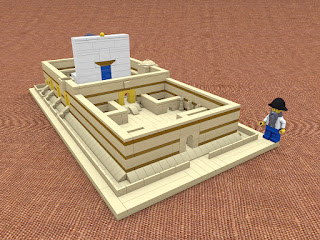 To give you an idea of the relative size of the model, this picture includes a pirate/priest minifig (that's all I had on hand) for comparison. The official scale of this model is 10 amos per stud. It is remarkably similar in scale to the much larger model built by Yitzy Kasowitz. His Temple is based on the opinion of Rambam and shows what the Temple would have looked like in its Herodian reconstruction. My model follows the view of Tiferes Yisrael and shows what the original Second Temple would have looked like.