The Search for the True Blue — Part 1

Inspired by an interesting discussion I had over Shavuos, I am reprinting a paper I wrote for a college chemistry class (circa 1997) on the history and rediscovery of techeiles (tekhelet).

Introduction
In recent years, Jewish scholars have taken advantage of modern analytical techniques to reexamine the ancient art of dyeing. The impetus behind this contemporary investigation is the possible revival of a certain practice of the Jewish religion which has been hidden for over 1300 years.
In a culling of information from a wide variety of sources including religious, archaeological, chemical, and classical, new light has been shed on the problem of identifying the ancient dye known as tekhelet.

Tekhelet is the Hebrew word for a specific dye used in the performance of a number of Biblical commandments (Figure 1). 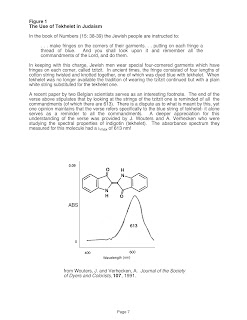 The spectrum of English parallels for this word includes green, blue, and purple (in their various shades) as well as black, although the most accepted translation is that of “sky blue.”1 Based on a number of sources in the Talmud (the collection of writings constituting the basis for Jewish law) the authentic tekhelet dye is said to be derived from a marine animal indigenous to the waters of the Mediterranean. Using this information as a starting point, researchers turned their powerful minds to a study of the ancient Mediterranean dye industry in which marine mollusks featured prominently (Figure 2). 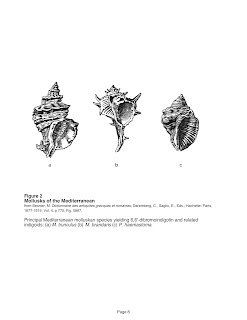 Much has been discovered in this field through archaeological investigation of classical accounts and what follows is a digest of pertinent historical abstracts and relevant facts.

Archaeological Background
The most significant of the ancient dyes is commonly referred to as Tyrian Purple (for the city of Tyre which was once a large dyeing center). Due to the importance of this dye in ancient times it was well-documented by its contemporaries, providing present-day scholars with a great deal of information about it. The Biblical tekhelet had long been associated with Tyrian Purple and at least from the extensive archaeological evidence it appears that the two dyes are synonymous. Although recent findings have proven otherwise, in the context of the following history the two may be taken as one and the same.

The purple dye industry of the ancient world was founded upon the island of Crete in the neighborhood of 1750 BCE.2 Down through the years this craft gained popularity and flourished among the civilizations flanking the Mediterranean Sea (Figure 3). 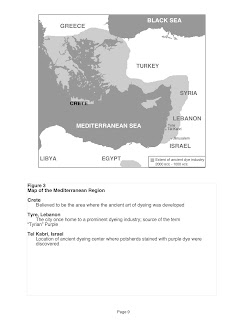 Since the dyes were rare and valuable, purple-colored garments were most often found in the wardrobes of the local ruling class. In the Tell-el-Amarna tablets (1500-1300 BCE) it lists subatu sa takilti — a garment of tekhelet — as one of the precious gifts given by the King of Mittani as a dowry to the Egyptian prince marrying his daughter.3 Wool dyed with this purple was worth twenty times its weight in gold.4

The connection between dye and mollusk has been firmly established. Authorities such as Pliny5 and Aristotle6 describe which mollusks were used, how and where to find them, and the procedure for extracting the dye from them. Although the texts are vague in their account of certain key steps, modern attempts to reproduce this ancient procedure have resulted in success. In addition, along the Israeli and Lebanese coasts archaeologists have located the remains of ancient dyeing factories where large amounts of mollusk shells were found.7 They have even found vats and pots at those sites which contain dark stains, ostensibly residue of the famous purple dye.