SRO in the Azarah on Erev Pesach


Once upon a time, toward the end of the Second Temple era, King Agripas wanted to take a census of the Jewish people. He told the Kohen Gadol to keep track of how many Pesach offerings were brought that year in order to estimate the number of people. The Kohen Gadol collected one kidney from each offering, and at the end of the day they found that they had counted six hundred thousand pairs of kidneys (1.2 million in total), which was double the number of people who left Egypt. Even this was not an accurate estimate, because it did not count those who were tamei or who were far away from the Beis Hamikdash (and did not participate in the korban Pesach). Furthermore, this was only a count of the korbanos, not the people, for there was not a single korban that did not have at least ten people in the group that was going to eat it. They called that year the “Crowded Pesach” because there were so many people.


(summarized from Pesachim 64b)


This Gemara indicates that on one particular year, over one million korbanos were processed in the Beis Hamikdash on erev Pesach. In this post I would like to examine how many people could reasonably fit in the Azarah at one time and how to reconcile the result with our Gemara.

The Azarah measured 187×135 amos (Middos 5:1) which is equal to 25,245 square amos (For the purposes of this discussion we may bypass the contemporary halachic debate over the number of inches or centimeters in an amah. As we will see below, the Talmudic sources tell us how many amos of space a person takes up, obviating the need for any conversion.) Not all of this space could be used for people and their offerings, though, because there were many chambers, objects, and other pieces of architecture located within the Azarah. These are listed here and shown on the diagram (many of the dimensions are not stated in the sources and have to be estimated): 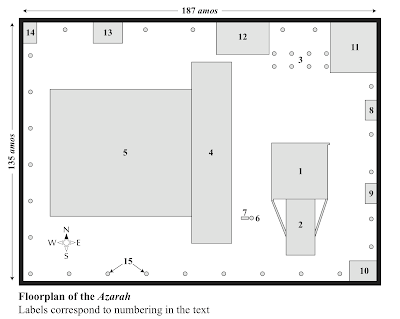 3) The eight short columns located to the north of the Mizbeyach where the korbanos were skinned and cut into parts: approx. 2×2 each = 32

5) The back of the Heychal Building, which included the Kodesh, the Kodesh Hakodashim and the small storage rooms (tau’im) built around the outside of the building on the north, south, and west: 70×78 = 5,460

6) The Kiyor, the large copper utensil that held the water used by the Kohanim to sanctify their hands and feet prior to starting the avodah: 1.5×1.5 = 2.25

7) The Muchni, a large wooden apparatus that raised and lowered the Kiyor from a hole in the floor of the Azarah: approx. 1×3 = 3

8) Chamber of Pinchas where the bigdei kehunah were stored and the Kohanim were dressed prior to performing the avodah: approx. 12×5= 70

9) Chamber of Chavitin, where the chavitin (meal offerings) of the Kohen Gadol were prepared each day: approx. 12×5 = 70

11) Chambers in the northeastern corner of the Azarah, including the Chamber of Hewn Stone (seat of the 71-member Sanhedrin court), Chamber of the Basin (where fresh water was stored), and Chamber of Parhedrin (housing for the Kohen Gadol for the week before Yom Kippur): approx. 22×23 = 506

12) Beis Hamoked where the Kohanim would be quartered when they served in the Beis Hamikdash: approx. 30×13 = 390

13) Chamber of Paroches where the large curtains of the Heychal Building were woven: approx. 13×8 = 104

14) Chamber of Shekalim where the half-shekel donations were stored: approx. 5×8 = 40

All of these combine to 10,607 square amos. Subtracting this number from the total size of the Azarah yields the amount of floor space, in square amos, available for people to stand:

A person is one amah wide (Succah 8a) and a person’s feet are half an amah long [which is why all of the steps in the Beis Hamikdash were half an amah long] (Rosh to Middos 2:3). A person therefore takes up 1 × ½ = 0.5 square amos (assuming, of course, that their stomach does not extend past their feet!). This would mean that a maximum of 29,276 people could fit into the Azarah at one time.

Some of these people are the Kohanim doing the avodah. When the Mishnah wishes to use a large number it often picks 300 (see Middos 3:8), so for argument’s sake let us assume that about 300 Kohanim could service the entire Azarah. This leaves room for about 29,000 people to stand.

Some of the space was also taken up by the animals. To make it simple, let us assume that a sheep takes up as much room as a person, so we must divide 29,000 in half. If so, the total number of people with their korban that could fit into the Azarah at one time is 14,500.

The korban Pesach was brought in three shifts. Therefore, the grand total of Pesach korbanos that could be brought each year is 43,500.

Admittedly, this is nowhere near the figure of one million mentioned in the Gemara. But the truth is, even if the above approximation of the standing room in the Azarah is completely wrong, and that every square amah of space inside the Azarah walls could somehow be used (!), and that we do not count space taken up by Kohanim (!!), and that the people carried their korbanos on their heads so as to take up less space (!!!), that still only results in room for 50,490 people/korbanos at a time, or 151,470 in total after all three shifts.  When the math fails us even after this ad absurdum calculation, the answer must lie elsewhere.

Of the ten levels of holiness with which Hashem imbued our physical world, all but the lowest few are located within the Beis Hamikdash (Keilim 1:6-9). It should come as no surprise that in such a holy place the usual laws of nature do not always apply, as evidenced by the fact that ten miracles occurred regularly in the Beis Hamikdash (Pirkei Avos 5:5). One of those ten miracles was that of עוֹמְדִים צְפוּפִים וּמִשְׁתַּחַוִים רְוָחִים, they would stand crowded together and bow down with room to spare. This would happen when thousands of people gathered in the Azarah during the festivals, standing shoulder-to-shoulder to watch the avodah. When it was time to bow down (such as when the Kohen Gadol spoke the Name of Hashem during the Yom Kippur avodah), they found that not only was there was plenty of space to do so but that each person was distant enough from his neighbor that they did not hear each other’s personal prayers (Vayikra Rabbah 10:9). This is a manifestation of the principle הֶחֶזִיק מוּעָט אֶת הַמְרוּבָּה, a small [space] held many [people], a phenomenon experienced by the Jewish people numerous times throughout their history (ibid.). In one such instance where this was quantified we find that Moshe gathered 600,000 people within the confines of the Mishkan, an area that measured 100×50 amos (ibid.). If Hashem suspended the constraints of physical space to such an extent in the Mishkan, then He could certainly allow over one million korbanos to be processed in the Beis Hamikdash on erev Pesach. [The miracle of fitting Klal Yisroel into the Mishkan is approximately twice as “great” — quantitatively — as the miracle of the korbanos on erev Pesach. The math is left as an exercise for the reader.]
This article was first prepared for and printed in the Pesach Kuntress of the Beis Midrash of Ranchleigh (available on the shul website).