The Search for the True Blue — Part 3

The Science of Tekhelet
Since the publishing of Rabbi Herzog's findings the chemical pathway for the production of the dye precursors in mollusks has been elucidated.10 Inside the hypobranchial gland of the animal the colorless waste product indole is modified for eventual excretion. This pathway produces a number of molecules, depending on the species, which serve as precursors to the purple dye (Figure 4). 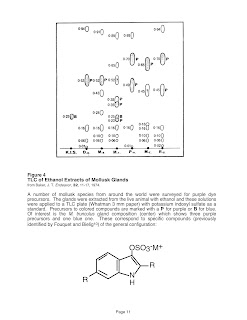 When the gland is smashed for the purpose of extracting the dye, the contents are exposed to air which converts the indole-based compound to 6,6'-dibromoindigotin (DBI) (Figure 5 Steps 1-3). 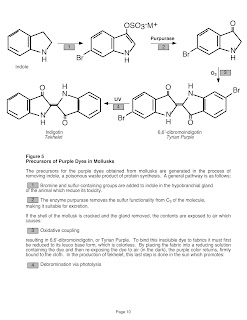 The two conjugated ring systems of DBI make it an excellent chromophore and give it a purple color. A wide array of techniques have been used in characterizing the chemical structure of this molecule including TLC,11 chemical assays,12 UV, visible, and IR spectroscopy (Figure 6),13 ESR,14 and mass spectrometry (Figure 7).15 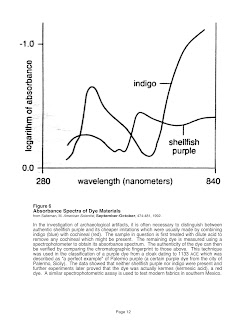 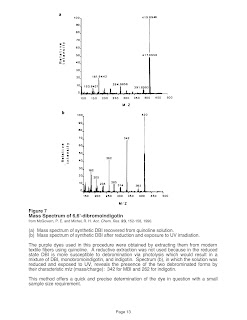 With chemical structure in hand, scientists were interested in comparing this compound with the purple dyes found on artifacts. An important requirement for any test of this nature is that it require a small sample size in order to minimize the destruction of valuable archaeological material. In one case, HPLC was used to analyze vat stains from a known Tyrian Purple dyeing site in northern Israel (Figure 8).16 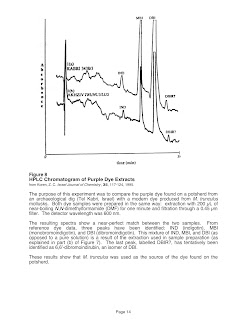 The chromatographic fingerprint of the vat stain was nearly identical to that of DBI, verifying the assertion that M. trunculus was one of the sources of Tyrian Purple.

As more and more evidence accumulated to prove that the Tyrian Purple of old was indeed 6,6'-dibromoindigotin, it remained to be proven that tekhelet and Tyrian Purple were, in fact, identical. This was accomplished in the early 1980s by Otto Elsner of the Shenkar College of Fibers (Israel). In working with M. trunculus dye, he noticed that wool dyed on cloudy days tended towards purple while wool dyed on sunny days was blue. This prompted an investigation of the photochemical properties of the dye and the results of this study provided Jewish scholars with an answer to the 1300-year old mystery of tekhelet.

In the dyeing process, the purple extract from M. trunculus must be placed in a reducing solution in order for it to bind effectively to the wool. Elsner discovered that exposure of this solution to sunlight will change the dye's color from purple to pure blue.17 The reason for this is based on the chemical properties of DBI. In the reduced form, the two bromine-carbon bonds are cleaved by ultraviolet irradiation (sunlight) to form indigotin (Figure 5 Step 4, above). Thus Rabbi Herzog's difficulty concerning the color is alleviated by showing that Tyrian Purple is actually a precursor to tekhelet.