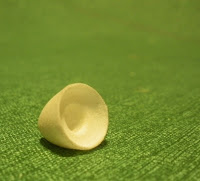 In Temple times when the Jewish people would travel to the city of Jerusalem for the regalim [pilgrimage festivals], they would have the opportunity to hear the birkas Kohanim [priestly blessing] from thousands of Kohanim at once. I recreated a glimpse of this scene in miniature.

The Kohanim are divided into twenty-four mishmaros [family groups], and normally one mishmar would serve in the Mikdash at a time. During the three regalim, every Kohen in the nation would be present in the Mikdash and they would all participate in the day's work. Imagine the scene with thousands of Kohanim from all parts of the country all gathering on the steps of the Ulam to recite birkas Kohanim together.

These steps could hold over 2,000 men standing shoulder-to-shoulder.

We are told that when there was not enough room on the steps for the Kohanim then the overflow crowd would stand on the duchan, the platform to the east of the Mizbeyach where the Leviim would normally stand to sing and play musical instruments to accompany the daily service.

There is some discussion about whether a Kohen who is blemished may participate in the birkas Kohanim (see Taanis 27a with Tosafos אי מה משרת and Orach Chaim 128 with Magen Avraham §54). Apparently, the Kohanim in my picture maintain that it is permitted.