Moving a Door in the Beis Hamoked 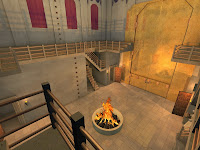 The Beis Hamoked formed one of the major Azarah gateways, and Middos 1:7 states as follows:

[The Cheil was the 10-amah-wide area just outside the Azarah walls on all four sides, demarcated by a low wooden fence.] The Mishnah did not say that the northern gate opened to the Har Habayis, but to the Cheil, which means that the gate — and presumably the outer wall — must have been within 10 amos of the Azarah wall. In his commentary to this Mishnah, Tiferes Yisrael also confirms that the gate opened to the Cheil. The work Ezras Kohanim states this more definitively, concluding that the northern gate of Beis Hamoked must have been around 8 amos away from the Azarah wall so that when a person exited the gate he was clearly still in the Cheil and not on Har Habayis.

The thing that bothered me about this conclusion is that the word חיל, Cheil, is mighty close to the word חול, unsanctified (referring to the general expanse of Har Habayis as compared to the sanctified Azarah). If the Mishnah meant to say that the northern gate was in the חול, unsanctified area, then the Beis Hamoked could extend much farther than 10 (or 8) amos from the Azarah wall. Still, there are no obvious indications that a variant reading exists. I also checked the first printing of Tiferes Yisrael to Middos and there, too, the reading is the standard חיל. The only hint to a different girsa is Meleches Shlomo to the Mishnah who references Mefareish to Tamid 26b (where this Mishnah is cited) who quotes the Mishnah as reading חול. But this is clearly not the mainstream view.

In my current model, the Beis Hamoked extends about 15 amos past the northern Azarah wall. Rather than disrupt the configuration of the entire building to make it fit into 8 amos, I thought to take a different approach. Leaving the building footprint more or less as is, the northern gate itself could be moved southward until it was within the Cheil.

One potential problem could arise with moving the gate southward. We know that the Sages imbued the Azarah gateways with the sanctity of the Azarah and for this reason they did not want people (who were potentially tamei) gathering in the areas beneath the gates when they were closed. To prevent this from happening the doors of the gates were hung at the outer edge of the Azarah wall so that there was no space within the gateway for people to shelter (see this post for more on this topic). By moving the northern Beis Hamoked gate to the south it creates an overhang that would invite people to gather.