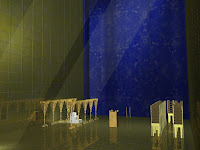 The answer emerges from a curious ambiguity in the laws governing the sanctity of the Beis HaMikdash. The Mishnah (Keilim 1:8-9) teaches that the various parts of the Beis HaMikdash possessed increasingly higher levels of sanctity as one progressed inward toward the Kodesh HaKodashim. We learn, for example, that the Har HaBayis — the large, outer portion of the Beis HaMikdash complex that measured 500×500 amos (Middos 2:1) — was restricted to certain types of tahor people, whereas the Main Azarah — an area measuring 135×187 amos (Middos 5:1) — had an even higher level of sanctity. Although these areas are clearly defined physically in Tractate Middos and spiritually in Tractate Keilim, we are not told the dimensions or status of the thickness of the walls dividing these areas. Thus, as a person walks from the Har HaBayis into the Azarah through one of its gates, at what point is he considered to be “in” the Azarah — when he crosses the threshold of the gateway at the outer edge of the wall or when he enters the Azarah proper?

This ambiguity would take on a very practical significance when the Second Beis HaMikdash was originally built. Inside the Heichal Building there was an amah-wide section of space called the Traksin that divided the Kodesh from the Kodesh HaKodashim. This word is derived from Greek, connoting a place that is both inside and outside, since it divided between the inside — the Kodesh HaKodashim — and the outer Kodesh. See diagram.

In the First Beis HaMikdash there was a wall built in this space with a doorway opening to the Kodesh HaKodashim. However, in the Second Beis HaMikdash the ceiling of the Heichal was taller than in the First Beis HaMikdash and it was not possible at that time to construct a structurally sound wall of the required height that was only one amah thick. They could not make the wall any thicker since that would take away space from either the Kodesh or the Kodesh HaKodashim, the dimensions of which were not subject to modification. It was decided to separate the two areas using a curtain, as had been done in the Mishkan. However, the Sages did not know whether that one-amah space possessed the sanctity of the Kodesh (in which case the curtain should be hung at the western edge of the Traksin) or the sanctity of the Kodesh HaKodashim (in which case the curtain should be hung at the eastern edge). On account of this uncertainty they hung two curtains there, one at the eastern edge of the Traksin and one at the western edge, and left that one amah as undefined.
The situation described above took place at the beginning of the Second Beis HaMikdash era, but the underlying ambiguity regarding the sanctity of wall thicknesses was an issue that had to be addressed when the First Beis HaMikdash was built. Since this was not part of the known body of Torah law, the decision was left to the discretion of the Sages. They ruled that the thickness of the wall shall have the sanctity of the Azarah itself. As a result of this ruling, the doors of the Azarah gates were hung at the outer edge of the wall to ensure that passersby could not inadvertently step into the sanctified area within the thickness of the wall when the doors of the gates were closed (Ezras Kohanim to Middos 1:3 s.v. להר הבית).
There was one exception to the above rule. At the main public entrance to the Azarah in the east (called the Nikanor Gate in the Second Beis HaMikdash era) the thickness of the wall was decreed to have the lesser sanctity of the Har HaBayis (Pesachim 85b explains the reason for this). This meant that a person standing just outside the Nikanor Gate was still some distance away from the sanctified Azarah area.  See diagram.

Just how far away would he be? In other words, how thick was the Azarah wall?
Rashash (to Pesachim 93b) deduces that the answer is five amos. The logic of his view seems to be along the lines of the “Mordy” scenario, that the very closest a person would be to the Azarah on Pesach eve and yet still not be in the Azarah is by arriving at the Nikanor Gate just seconds after the doors closed for the beginning of the third shift of offerings. Such a person would be exactly five amos from the Azarah, hence we learn that the walls of the Azarah were five amos thick.