Daf Yomi: Aravos on the Mizbeyach (Succah 45a)

Inspired by a recent passage in Daf Yomi, I took out my Lego® Mizbeyach and a handful of white-clad minifigures for an impromptu photo shoot. 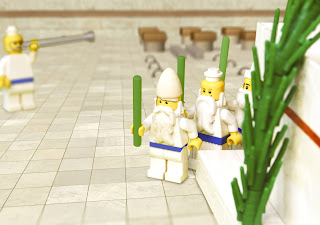 Special thanks to Hallel Newman for the aravah design idea.