Plumbing [in] the Depths of the Temple 2.0

The following is an updated version of this post that was newly prepared for print in the Beis Medrash of Ranchleigh Pesach Kuntress 5782:

The procedure of the Korban Pesach was identical whether performed on a weekday or on Shabbos, except that [on Shabbos] the Kohanim would rinse the floor of the Azarah against the will of the Sages (Mishnah, Pesachim 64a).

The Water System of the Beis HaMikdash

The Beis HaMikdash had a robust plumbing system that supplied water to many different locations throughout the complex. This water was used for a variety of purposes, including ritual purity, drinking, and washing. From the Talmudic sources and commentators we can identify the following components of this system:

A. Mikveh in the Chamber of Metzoraim (Tosefta Negaim 8:9). A person who had contracted tzaraas would undergo a purification process that concluded in the Beis HaMikdash. At one point the metzora was required to immerse, and would do so in a mikveh built for this purpose within the Chamber of Metzoraim located in northwestern corner of the Ezras Nashim [Women’s Courtyard]. See diagram below.

C. Mikveh above the Chamber of Parvah (Middos 5:3). The Chamber of Parvah (named for the person who designed it), located in the southeastern corner of the Azarah, was where the Kohanim would tan the hides of the sacrificial animals. On the roof of the chamber was a mikveh used by the Kohen Gadol on Yom Kippur.

D. Channel of flowing water (Middos 3:2). Starting near the southwestern corner of the Mizbeyach and running due south was a channel of flowing water in the floor of the Azarah called the Amah (since it was one amah wide). The water that flowed through the Amah was used for a variety of purposes, such as washing clothing, immersing vessels, and as a place to sweep hot coals that had spilled onto the floor. For safety purposes the Amah was normally kept covered but these covers could be removed as needed.

E. Mikveh above the Water Gate (Yoma 31a). One of the major gates on the southern side of the Azarah was the Water Gate. It took its name from the fact that on Succos the nisuch hamayim [water libation] was brought in through this gate. Above the gate was a mikveh used by the Kohen Gadol on Yom Kippur.

F. Pit for the Kiyor (Yoma 37a). The Kiyor was a copper vessel that held the water used by the Kohanim to sanctify their hands and feet in preparation for the avodah. For halachic reasons, the Kiyor was lowered into a pit of water each night and then raised out of the pit the next morning.

G. Place of Drainage Water (Middos 4:7). This was a large pool located on the southern side of the Heychal Building. Rainwater that drained off the roofs of the Heychal collected here.

H. Mikveh for the Kohanim located beneath the Beis HaMikdash (Middos 1:6). [Not shown since its exact location is unknown.] The Kohanim who had been sleeping in the Beis HaMoked [Hall of the Fire] would immerse here prior to beginning the avodah each morning. Additionally, should any Kohen sleeping in Beis HaMoked became tamei during the night he would go down to this mikveh and immerse. 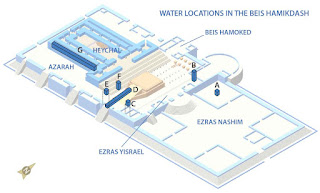 The sources further indicate that many of these locations all received their water from the same place:

• The channel of flowing water was also fed by the Eitam Spring (see Tiferes Yisrael to Middos 2:6 §74-5 and his Beis HaMikdash Diagram §33).

• The pit for the Kiyor was filled with water from a spring (Rashi to Zevachim 20a).

• The Place of Drainage Water was connected to the channel of water (Chanukas Habayis).

Based on this information we can conjecture that the water system may have worked as follows: Water from the Eitam Spring entered the Har HaBayis from the west and was directed beneath the Kodesh HaKodashim (see Tiferes Yisrael loc. cit.). From there it entered the Place of Drainage Water (G) and flowed east, through the Kiyor pit (F), into the channel of water (D) that began near the southwestern corner of the Mizbeyach. This channel ran south, out the Water Gate, and near the gate some of the water was diverted up to the mikveh above the gate (E) as well as to the mikveh above the Chamber of Parvah (C). 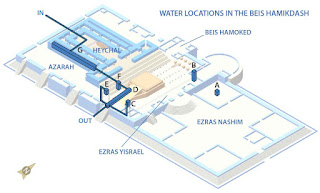 I have not seen any sources indicating that this water system also connected to the mikveh in the Chamber of Metzoraim or to the mikveh beneath the Beis HaMikdash used by the Kohanim, although it does seem logical to have all these mikvaos connected and fed by the same source. We do know that the well, or cistern, in the Chamber of the Gooleh was not connected to this water system since the water in that chamber was clean and sweet and more suitable for drinking, as opposed to the water found elsewhere in the Beis HaMikdash.

The water that fed the system described above came from a spring called Eitam located outside Jerusalem. This spring was at an elevation of approximately 23 amos above the floor of the Azarah and the water was directed through pipes that ran beneath the floor of the Beis HaMikdash and then up to the two elevated mikvaos using the concept of a siphon.

A siphon is used to move water against the pull of gravity, often for the purpose of transporting it over some barrier (such as a wall that cannot be breached). One end of a pipe is inserted into the water and the other end is placed on the other side of the barrier, arranged in such a manner that the open end of the pipe is lower than the end inside the water. Suction is temporarily applied to the open end of the pipe to start the flow of water. Once the water is moving through the pipe the suction can be removed, and — thanks to Hashem’s beautiful system of fluid dynamics — the flow of water will continue up and over the barrier and out the lower end of the pipe with no further intervention.

Just as a siphon can move water up and over a barrier, it can also move water into, and then out of, a valley. When the water flows down and then up it is called an inverted siphon.

The Beis HaMikdash used an inverted siphon system. Aqueducts carried the water from the Eitam Spring to Har Habayis and from there it entered into a system of underground lead pipes and clay pipes mounted in niches along the walls. First the water traveled under the Heychal Building and Azarah floor and then it flowed up to the two elevated mikvaos above the Water Gate and Parvah Chamber. See diagram (only the Water Gate mikveh is shown in this diagram).

One difficulty with the system of pipes described above is that, in order to bring water up to the two elevated mikvaos, the entire system must be closed (that is, it must be completely sealed from the point where the water enters the pipe at the Eitam Spring until it exits the pipe into the mikvaos). Unfortunately, at every point along the way there were openings: The Place of Drainage Water needed to be open in order to receive the runoff from the Heychal Building roof; the Kiyor pit needed to be open so that the Kiyor could be lowered and raised; the channel of water needed to be open near the Mizbeyach to allow the excess blood poured on the Mizbeyach to drain into it. This difficulty may be resolved by assuming that the Beis HaMikdash had the means to close the entire system. [This could be accomplished by simply plugging the openings temporarily.] On Yom Kippur (which is the only day of the year the two mikvaos were used) the Place of Drainage Water, Kiyor pit, and Mizbeyach drains leading into the channel of water would be closed, allowing water to flow up against the pull of gravity and into the mikvaos.

On a daily basis, sacrificial blood entered the channel of water in the Azarah floor and was carried out of the Beis HaMikdash. On Erev Pesach, however, the Kohanim would block the channel at the Water Gate and close the doors of all the other gates [at the beginning of each of the three shifts of people who came to slaughter their Pesach offerings], sealing the perimeter and causing the water to back up and flood the Azarah. Not only did this trap the water, but also the blood of the thousands of Pesach offerings slaughtered upon the floor, and the Gemara records that [by the end of each shift] the blood was knee-deep, forcing the Kohanim to walk upon platforms to keep from soiling the hems of their robes (Pesachim 65b). After all of the offerings had been completed [at the end of each shift] the Kohanim would remove the plug blocking the channel of water and the blood-water mixture would drain from the Azarah. [The Ezras Yisrael (the eastern portion of the Azarah) was 2.5 amos lower than the main Azarah and so any liquid that collected there would not be able to flow out via the channel of water. This area therefore required its own set of drains.]

The Mishnah cited at the beginning of this article states that the Kohanim rinsed the floor of the Azarah on Erev Pesach even when it occurred on Shabbos. The Sages maintain that rinsing the floor in this fashion is similar to sweeping a floor, an act that is prohibited on Shabbos, and for this reason did not approve of how the Kohanim cleaned the floor in the Beis HaMikdash (for further discussion and explanation of this dispute, see Pesachim 65a).