What object in the Beis Hamikdash was shaped like an octagon, made out of gold, and displayed prominently for all to see?

Two more clues for you:
• The octagon was only a part of the object.
• This object was present in the Second Beis Hamikdash but not in the First (or presumably in the Third).

Here are some of the pieces I used to build a Lego® model of this octagon: 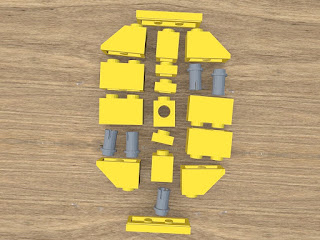